Kevin D. Watkins, MD ’93, MPH, who serves as public health director for Cattaraugus County in New York, discusses disparities in COVID-19 infections and deaths across the state, and how to build a more equitable future of health.

Kevin D. Watkins, MD ’93, MPH, is president of the New York State Association of County Health Officials (NYSACHO), the collective voice of local health departments in the state. In New York, as in many other states, African Americans are disproportionately affected by COVID-19. An analysis of state and local health department data from across the nation in early June found that Blacks, who are 13% of the U.S. population, accounted for more than a quarter of all COVID-related deaths. The Centers for Disease Control and Prevention reported in August that African Americans, American Indians and Latinos were roughly five times more likely to be hospitalized for treatment of the virus than white, non-Hispanic persons. The CDC data also showed that African Americans died at a higher rate than any other group. Here, Dr. Watkins, who also serves as research assistant professor for the School of Social and Preventive Medicine, University at Buffalo, discusses barriers to health equity.

The Black community is most likely to have the worst outcomes of any other race or ethnicity in most categories. Even with this knowledge, we as a medical community have been slow to address it

HELIX: What has the COVID-19 pandemic taught us about the unequal burden of disease?

Dr. Watkins: New York was initially the epicenter of the pandemic in the United States. Health officials in New York are still trying to find answers for reasons why certain populations had poor overall outcomes than others. On first review, it appears to hinge on the social determinants of health of certain populations. Specifically, underlying health conditions — hypertension, diabetes, heart disease, respiratory diseases — those are huge factors in the severity of the virus on these individuals. Access to primary care services or seeking medical attention in a timely manner may also factor into the overall outcome. In addition, a compromised hospital surge capacity in the more densely populated areas is being factored into causation. Did the population that had poor outcomes get admitted to an ICU in a timely manner or were they placed in a corridor? Were they placed on ventilators or were they given other ventilator support systems? Were they part of a clinical drug trial? If so, were they given the actual drug or a placebo? All of these questions will be considered when trying to determine the reasons why certain populations had such poor outcomes. 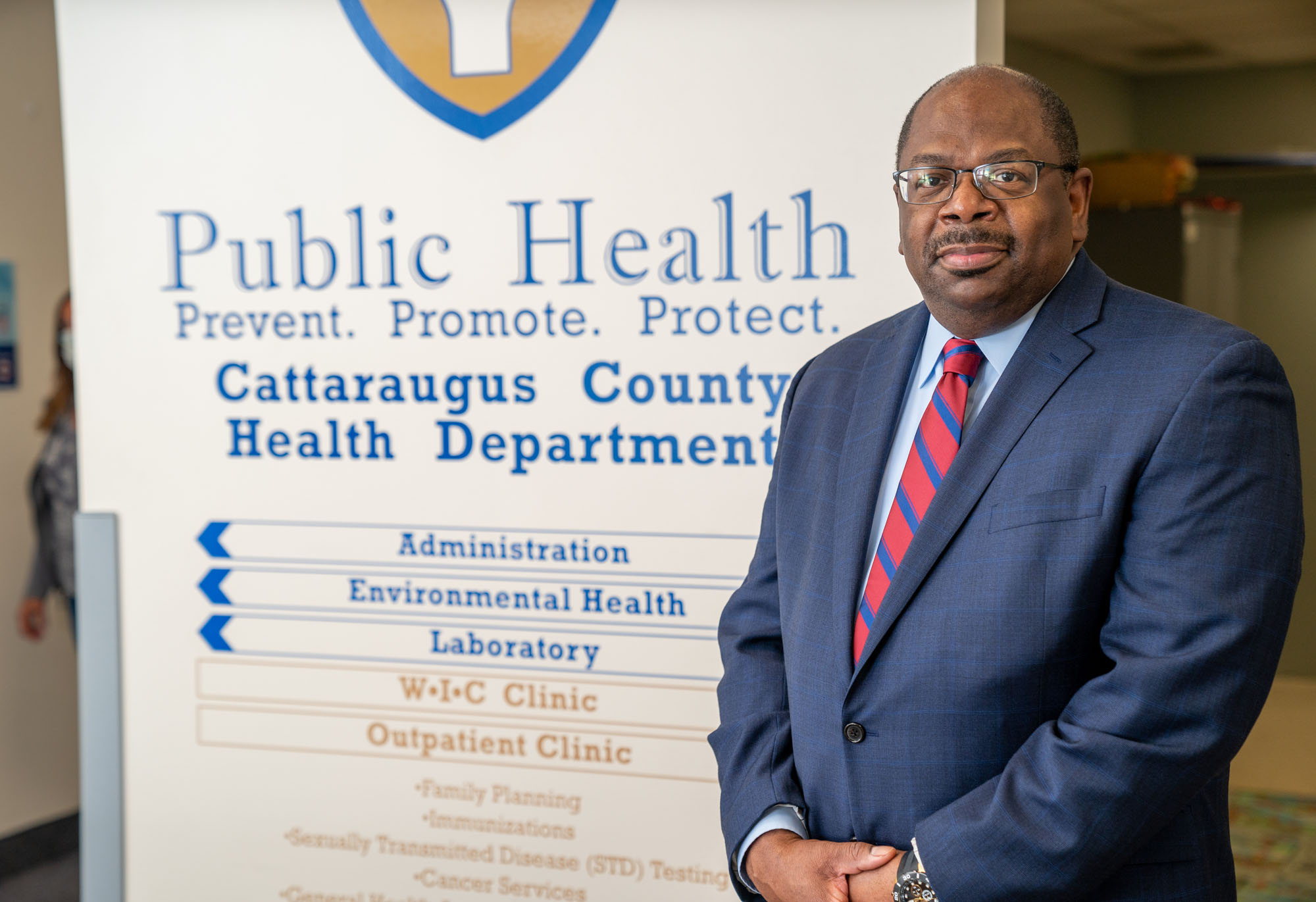 The New York metropolitan area, which is so densely populated, spiked the numbers for the state: 16,350 deaths from COVID-19 as of Aug. 17, and deaths across the state overall numbered 25,256. but your cattaraugus county, population 76,840, is a different story: 138 confirmed cases and 4 deaths.

As the public health director in Cattaraugus County, I’m serving a population that’s 92 to 93% white. But we still face some of the same challenges I confronted as a doctor in Chicago: chronic conditions and unhealthy behaviors, major factors that lead to poor outcomes for a community. We’re home to the Seneca Nation of Indians. Three of our four deaths were from that community. Our hospital never exceeded its bed capacity. We always had enough ICU beds and ventilators. But people with underlying health conditions tend to have poor outcomes from COVID-19, which might also be related to an overwhelming immune response. These particular patients did receive supportive care, but whether they got all the resources available, i.e., clinical trial meds, is another story. When COVID first made impact in New York State, clinicians did not know to give convalescent plasma, the antiviral drug remdesivir and anticoagulants as a first line of defense for patients in the ICU. Rural hospitals were the last to receive remdesivir when it was issued by state health departments because confirmed cases were far fewer than in densely populated areas.

My biggest challenge is to really change the social determinants of health for our residents and improve equality in health care for all.

What about factors related to race and ethnicity?

We know there is unconscious bias within the medical community. There is also internalized bias in the Black community about the medical community. Tuskegee* continues to fester across generations. You see it as a physician. We just talked about COVID. Who normally participates in clinical trials? Who normally refuses clinical trials? Who gets the best treatment for chronic diseases like diabetes and hypertension? There have been occasions in my training as a physician when we would say, “This patient is less likely to come back or follow up for treatment — give them the antibiotic cocktail for their STD, and send them on their way.” We may unconsciously withhold optimal treatment if the patient is not doing their part, like returning for drug-level monitoring. Physicians sometimes unknowingly see certain patients in a certain dimension and prescribe medications based on internal perceptions. And it’s the same with patients who do not trust physicians and will not take certain medications based on what they’ve heard from a friend or family member. Occasionally, providers don’t explain a diagnosis or medications in a way patients can understand. Occasionally, they prescribe medications patients can’t afford. When those patients come back for a routine visit or to the emergency room, their health issue has worsened. It’s a vicious cycle, particularly within the Black community.

How does Black Lives Matter bode for improved health?

The nation is finally really talking about race, but in the medical community, this is not news. We see this in all our health outcomes data: The Black community is most likely to have the worst outcomes of any other race or ethnicity in most categories. Even with this knowledge, we as a medical community have been slow to address it. It’s an issue that we must place front and center. We have to do better. NYSACHO realizes this and we’re beginning to make this part of our initiative to offer more resources to communities where health outcomes are worse. We want to make sure when we talk about the social determinants of health, we look at communities that disproportionately have worse outcomes than others in New York State and try to change the way we deliver the message of changing certain behaviors in order to improve the health outcomes of that community. My biggest challenge is to really change the social determinants of health for our residents and improve equality in health care for all. 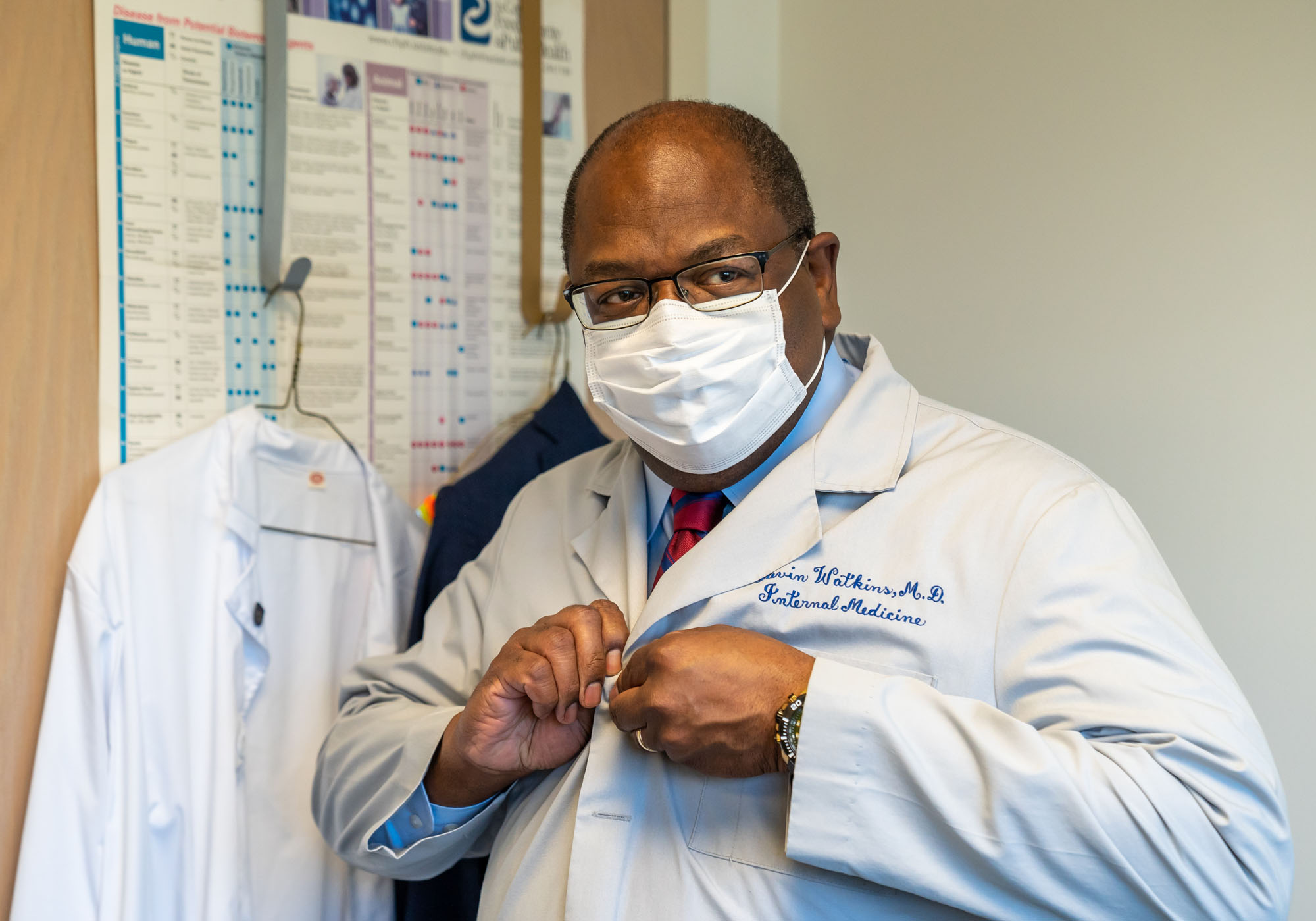 You completed your residency in internal medicine and primary care at the old Cook County Hospital in Chicago, where you also served as chief medical resident and attending. Do you think back on that time?

I do and do occasionally miss it. I hope I made a difference there, even though I don’t know with certainty, because there were just so many patients. The work was overwhelming, but fulfilling and gratifying. I think the biggest thing was knowing that my patients felt they could trust me and talk to me about anything. And since I have gone on to public health, having a voice at the table for the African-American community has impacted the way we are treating and recognizing that this community needs more attention than has been given to them in the past. Public health provides interventions that address the conditions in the places where we live, learn, work and play, and it has the greatest potential on our overall health outcomes.

Judy Masterson is a staff writer with the RFU Division of Marketing and Brand Management.

Please note, any group photo that does not feature physical distancing or mask wearing was taken prior to the State of Illinois issuing such guidelines. RFU has policies in place that require these and many other safety measures.

Foundation Gift Delivers “Peace of Mind” in Community When A Safe Place needed to move clients affected by domestic violence back into emergency sheltering from hotels where they stayed for precautionary reasons during the COVID-19 pandemic, they asked Rosalind Franklin University to provide COVID testing. Read More

"I know what my goal has to be." Andrew Romero, COP ’22, is keeping busy — and to say that is an understatement. Read how Mr. Romero works toward finding ways to adjust and maintain his study habits during COVID-19. Read More

The Future of Health Health professions students and practitioners are injecting new momentum for reform of the U.S. healthcare system and the social inequities that create barriers to care. Read More

The Art of Medicine: Benchtop to Bedside We asked Dr. Jeffrey Bulger to address how the humanities are crucial to teaching and learning around the practice of medicine, health care and research. Read More

Make an impact on student scholarships for the Chicago Medical School