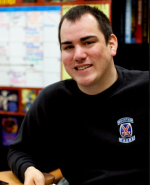 Ryan Greendeer is the Public Relations Officer for the Legislative Branch of the Ho-Chunk Nation. He previously served at the State of Wisconsin as its Tribal Liaison for the Department of Transportation, appointed the Interim Executive Director of the Great Lakes Inter-Tribal Council, and appointed as the Executive Government Relations Officer for the Ho-Chunk Nation.

Ryan began his military career in the United States Army Reserve at the 397th Engineer Battalion. After going to active duty, he was stationed in Hanau, Germany with the 19th Maintenance Company, 5/7 ADA Battalion of the 69th Air Defense Artillery Brigade. He was then stationed at Fort Drum, NY with the 10th Mountain Division. He received an honorable discharge and was medically retired from the service in 2007.

He’s been an advocate and volunteer in many communities including entrepreneurship, military/veteran, LGBT, tribal, and local organizations.