CyberSole: The Science of Saving Feet

By Sara Skoog
Drs. Rosenblatt and Crews, on right side of table, meet in spring 2022 with University of Illinois at Chicago engineering students in an RFU conference room.
Photo by Michael R. Schmidt

Researchers at RFU’s Center for Lower Extremity Ambulatory Research (CLEAR), in partnership with the University’s Innovation and Research Park and the University of Illinois at Chicago (UIC), are developing an intelligent orthotic insole — a “CyberSole” — that has tremendous potential to promote healing and prevent foot ulcers in patients with diabetes.

The technology essentially is a way to measure pressure and dynamically adjust based on the needs of the foot.

This insole could also benefit athletes and military personnel. The team members developing the device are considering a range of possibilities. They have the technology — a patent was issued in 2020 — and are now in the process of building a prototype. CLEAR’s Interim Director Noah Rosenblatt, PhD, Clinical Research Scientist Ryan Crews, PhD, and RFU’s Director of Innovation and Industry Relations Connie Cleary, DPM, detail the science inside the device, potential applications beyond the diabetic population, and the academic/industry partnerships essential to the product’s development. Conversations have been condensed and edited for length and/or clarity.

Helix: You’ve developed this unique idea for an intelligent orthotic, a “CyberSole” — why is there a need for a device like this?

Dr. Ryan Crews: In looking at either protecting feet at risk or helping feet with an open wound to heal, particularly in diabetic patients, one of the key principles to healing is reducing continued physical trauma to the site of the wound. When we talk about diabetic footwear, whether it be preventive or healing devices, the primary intention is to redistribute that physical stress away from the site of the wound. For example, if you have a wound on your big toe, you want to try and offload, or relieve, physical trauma to that big toe and shift that load somewhere else on the foot that doesn’t currently have a wound. You need to do that in an equitable manner, so you aren’t just transferring the problem to another spot on the foot and causing a new wound there. So, we came up with this concept for a dynamically adapting insole that will continuously assess how the foot is loading and automatically adapt to optimize loading over the course of a day.

Can you describe the device technology? How does it work?

Dr. Noah Rosenblatt: The technology essentially is a way to measure pressure and dynamically adjust based on the needs of the foot. The insole has sensors that respond to different pressures on the foot. If there is a region that has a high pressure, the device will signal a fluid-filled bladder in that region of the insole to make the fluid a little softer and make the bladders more firm in regions that have lower pressures. These needs can change based on a person’s activities; they might be walking fast or walking with a backpack, and that can change how the foot takes on the load during these activities. The insole can respond to these changes and adapt the pressures spatially across the foot. 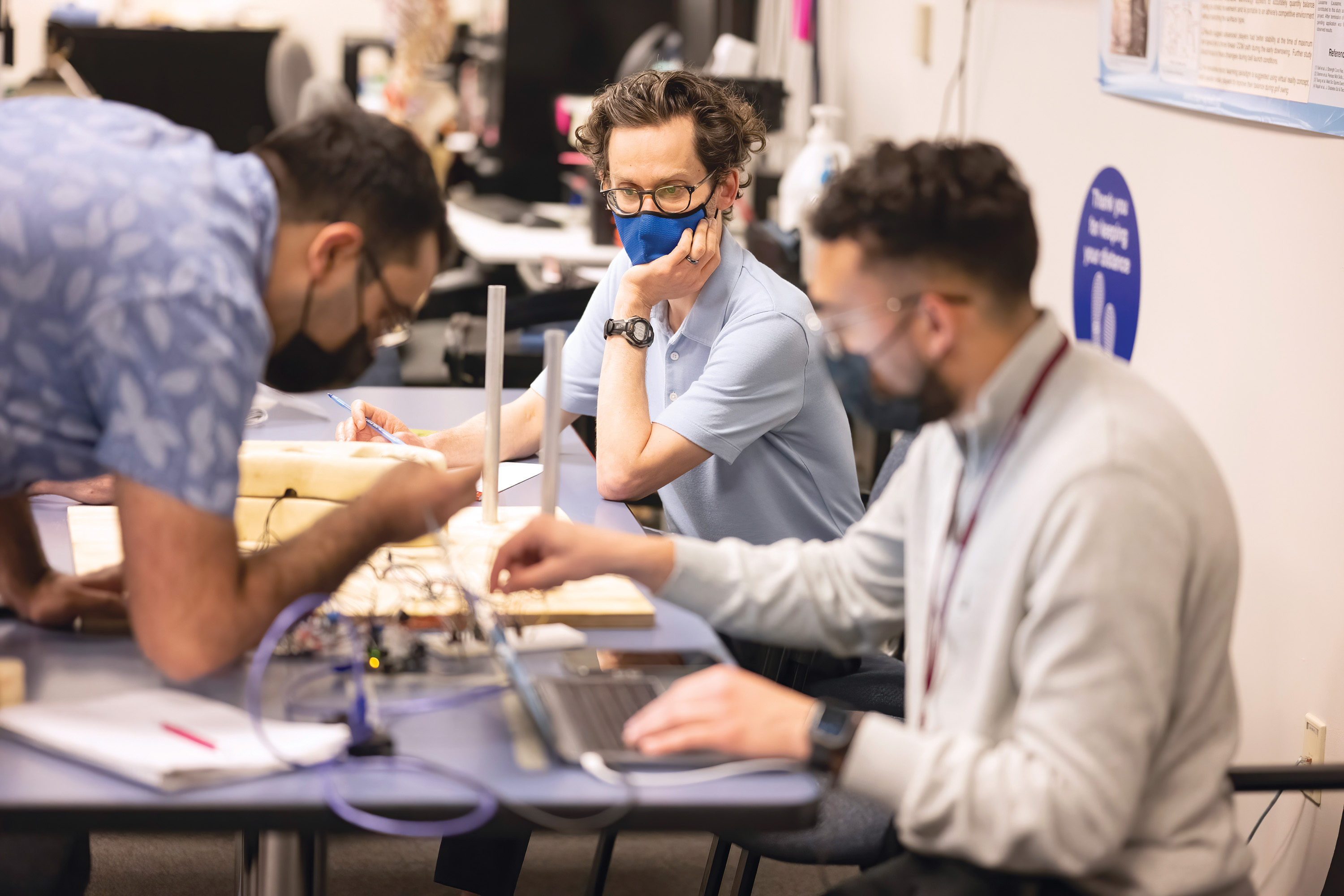 The ongoing research by the CyberSole team seeks to align with the largest volume of evidence concerning diabetic foot ulcer prevention, which is associated with therapeutic footwear that mitigates physical stress on the plantar surface of the foot.

What is UIC’s role in developing this project?

NR: Prior to coming to RFU in 2015, I was working at UIC and interested in studying prosthetics for individuals with a lower limb amputation. With my co-investigators there, we developed a concept to make an adjustable prosthetic socket that can improve comfort levels and overall mobility by using special fluids that you can change how, for lack of a better word, “squishable” they are by applying electrical current to them. So when I came to RFU, I knew Ryan was highly involved in researching diabetic foot ulcers, which is kind of outside my realm, so one day I said to Ryan, “Is this something that would make sense to apply to the foot?” We spoke to a couple of the podiatrists here and they agreed it would make sense, and we went from there. Since UIC was already listed as an inventor on the patent, it made sense to reach out to them, because this is clearly very technical and involves a lot of engineering prowess — which, while we’d like to think we have some, it’s beyond our scope of knowledge.

Dr. Connie Cleary: In addition to Drs. Crews and Rosenblatt, UIC’s College of Engineering faculty member Dr. Farid Amirouche was an inventor named on the original patent. With an established shared interest in the technology between RFU and UIC, Dr. Steven Kuemmerle (former RFU associate vice president for innovation and industry relations) worked with a number of UIC contacts to assess feasibility for proceeding with prototyping work. This eventually led to Crews and Rosenblatt being assigned as mentors for a UIC engineering senior design project. Part of the engineering students’ curriculum is to work on a real-life project, and so the students and their mentor, Dr. Jon Komperda, would meet with Drs. Crews and Rosenblatt to talk about the project and try to figure out what the best-case scenario would be for the prototype. They would then do pilot projects in terms of “Is this the right way to go? If we use liquid in the bladders, we need to figure out which substance would work best. Should there be a battery that extends out to another interface for recharging the sensors?” That work is ongoing.

How far along is the project in the development process?

RC: We’re at the stage of developing proof of concept. It’s definitely more of a benchtop prototype, so it’s not something that’s ready to go into a shoe and be worn by anybody, but it would be something to demonstrate the feasibility of having the smart fluid bladders adjust to loads. In theory, it is designed like an insole as far as the shape of it, but it wouldn’t be compatible with putting it in a shoe just yet.

What needs to happen between now and the time when someone could put this device in their shoe?

NR: Quite a lot has to go into this. Would this be considered under the FDA as a standard orthotic, or would it go in its own class? There are safety issues to consider with the fluids used, with the power source for recharging the device, making sure the device doesn’t overheat. What we’re recognizing is that the more things we solve, the more problems we find that need solving.

RC: I think our next major milestone would be getting to the point where we can do human-subjects testing. We still don’t have that complete benchtop model yet, but our hope is to have that solid benchtop model that transitions into that model that we can use for testing in our human-performance lab.

Relationships between academia and industry are essential to continuing the research and development of devices like CyberSole. How is RFU’s Innovation and Research Park fostering these partnerships?

CC: Under the leadership of our vice president for research, Dr. Ronald Kaplan, we are exploring ways in which we can make our technologies more appealing to industry. Here is one example: we engaged a company to provide some early information on what a potential prototype would look like. They did a pre-alpha study on what the best type of materials would be to create this insole. Another example of what we are doing to increase industry awareness under Dr. Kaplan is our membership in MTEC, the Medical Technology Enterprise Consortium, which allows us to engage with industry, academia and foundations. We were able to make pitches through MTEC, which led to us talking to a couple of companies who might be interested in working with Drs. Crews and Rosenblatt on developing the insole for use by warfighters. If you’re in the battlefield and you have problems walking, that could be an issue, so this device could potentially help save warfighters’ lives, especially in situations where there’s offloading requirements, or there’s uneven terrain, or the warfighter has some type of pathology in the foot. This device could be used for a lot of different scenarios.

Sara Skoog is a staff writer with RFU’s Division of Marketing and Brand Management. In addition to writing for Helix and other university publications, she also produces Pulse, RFU’s monthly e-newsletter.

Building Trust in the Time of COVID Allison Arwady, MD, MPH, commissioner of the Chicago Department of Public Health, urges RFU faculty and student researchers to share the story behind their science and why it matters. Read More

Treating 9/11 First Responders: Can genetics predict severity of PTSD? A better understanding of how traumatic and occupational exposures impact health in the long term can help reduce burden and improve treatment in first responders. Read More

Invisible And Stigmatized: What unique health disparities affect bisexual individuals? Nationally representative surveys reveal that 3% of adults and 6% of adolescents in the United States identify as bisexual, and these numbers are on the rise. Read More

‘Perhaps the Greatest Challenge’: How To Get Capital Behind Concepts Michael Beaubaire, MD, the first Entrepreneur in Residence for Helix 51, finds fulfillment in working with companies that offer hope through innovation. Read More

Documenting a Generation in the CMS Timeline A look back at The Chicago Medical School Quarterly, a journal that highlighted faculty/student research from the 1940s into the early 1970s. Read More