Gregory Friedman died in 2017 after taking tainted MDMA, also known as ecstasy or molly. Despite seeking medical treatment, he continued to experience hallucinations and suffered a psychotic break. He was 28.

His legacy includes a new web-based case simulation designed to improve clinician understanding of those who experience adverse effects from street drugs. Developed with key input by Baldwin Institute faculty Jim Carlson, PhD ’12, PA-C ’01, and Robin Dyer, MD, OTR, the tool is available on Full Code, a popular app and web-based medical simulation for practice in clinical decision-making. It has been used by thousands of students and clinicians to improve learning around diagnosis and treatment of patients who fall ill after using psychostimulants.

As a primary care physician or any healthcare provider busy balancing the needs of many patients — you never want to miss something.

Development of the MDMA simulation case was funded and inspired by the GPF Foundation, established in memory of Mr. Friedman, who grew up in RFU neighbor community Lake Forest. Dr. Dyer used her medical experience, in addition to experience with other patients, to write a case study and script for a standardized patient simulation, a manikin case and ultimately the Full Code simulation.

“Greg’s experience really struck a chord,” said Dr. Dyer, an instructor in the Department of Healthcare Simulation. “As a primary care physician or any healthcare provider busy balancing the needs of many patients — you never want to miss something.”

In overdose cases, clinical care often focuses on the immediate toxic effects. But complications from taking ecstasy at a concert can manifest for days, weeks or months later. Patients and providers may not make the connection.

Practice with the MDMA simulation case will help increase awareness around a clinical blind spot on the delayed effects of psychostimulant use. Players can interact with a virtual patient to collect information, order tests, and make diagnosis and treatment decisions. 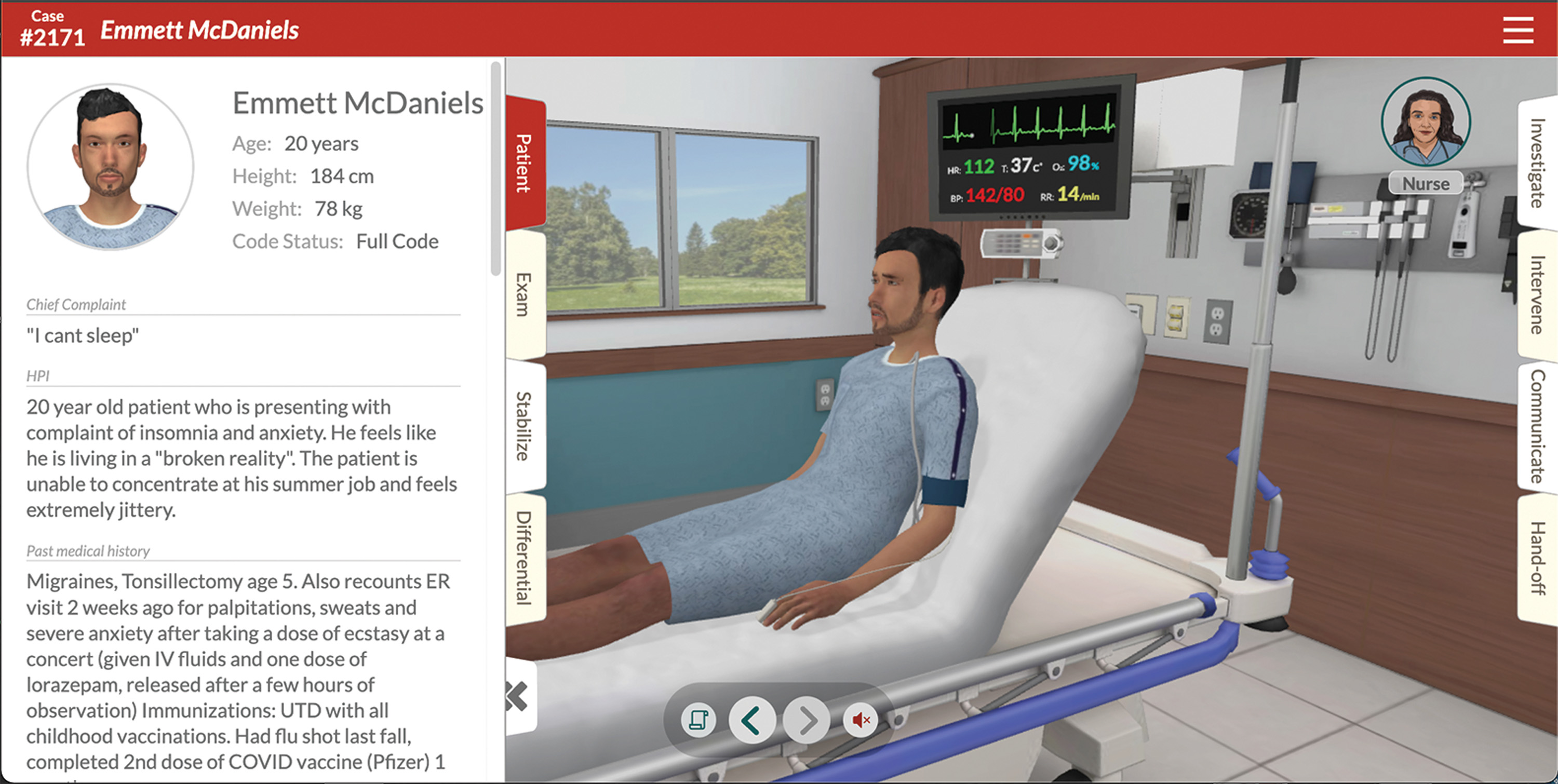 MDMA simulation cases as they appear in the Full Code app, with information that includes a patient’s general status and what exams have been performed.

“When an overdose patient with latent symptoms initially sees a primary care provider, it’s a question of ‘Will you recognize it?’” said Dr. Carlson, vice president for interprofessional education and simulation. “Health care is learned by repetition. The strongest reasoners are the ones who see the patterns — this is the way a patient presents with this condition. But they also recognize when something is just not quite right in terms of the pattern, and they are able to back up — I call it Sherlock mode — and start asking all the deductive questions. They’re very deliberate about those questions to tease out the problem. They think, ‘I don’t want to miss anything here.’”

Dr. Carlson, who is a 2021–22 American Medical Association Health Systems Science Scholar, reached out to Minerva Medical Simulation Inc., the company behind Full Code, in January 2020 to express interest in creating patient cases.

In the first month our simulation was deployed, there were over 10,000 case plays. Thousands of providers and future providers explored the case and, hopefully, learned something about this challenging topic.

“They were looking to begin working with healthcare professionals and medical schools,” he said. “We were one of the first to gain access to Full Code’s authoring tool.”

“When the foundation first approached us, they were looking for us to build a simulation to do within RFU, among our medical, physician assistant and pharmacy students,” Dr. Dyer said. “And it can be used that way. But Jim had the idea that if we deployed it in Full Code, we could reach many more people. In the first month our simulation was deployed, there were over 10,000 case plays. Thousands of providers and future providers explored the case and, hopefully, learned something about this challenging topic.”

“That’s the magic of virtual case studies — you can achieve such scale,” Dr. Carlson said. “The technology is getting better and better at emulating near-real experiences. Full Code case players can make a decision for a patient, receive feedback from the program on strengths and weaknesses, and practice again without risk to an actual patient. The web/app-based platform allows delivery across a large scale and limitless number of providers. That’s the power of Full Code and web-based case players.”

Judy Masterson is a staff writer with RFU’s Division of Marketing and Brand Management.

CyberSole: The Science of Saving Feet Can an orthotic insole be designed to adapt to changing foot pressures in real time? CyberSole researchers might have an answer. Read More

‘Perhaps the Greatest Challenge’: How To Get Capital Behind Concepts Michael Beaubaire, MD, the first Entrepreneur in Residence for Helix 51, finds fulfillment in working with companies that offer hope through innovation. Read More

Documenting a Generation in the CMS Timeline A look back at The Chicago Medical School Quarterly, a journal that highlighted faculty/student research from the 1940s into the early 1970s. Read More