Filling a Prescription for the Community

When Tracy Reed, DPM ’97, DABPM, sent her patients away with prescriptions, she couldn’t be sure they took the next step to fill them. Being in an under-resourced part of St. Louis didn’t help, since that meant many of Dr. Reed’s patients couldn’t always easily access pharmacies — or health care.

“There’s not much around here but some houses and some cemeteries,” said Dr. Reed, who has been in private practice for 20 years in northwest St. Louis, right at the edge of the city. “Down the street from us, a Walgreens closed. There’s another Walgreens that’s somewhat close to us. There’s a federally qualified healthcare center not too far away. Other than that, there’s no large medical centers in the immediate vicinity.”

Wanting to streamline ongoing, long-term medical care for her patients, Dr. Reed and a pharmacist partner launched TPD Pharmacy in the same building as her practice in June 2017. Jensine Chacko, PharmD, now serves as the pharmacist in charge, offering quick-fill prescriptions, free delivery, pickups after appointments or during office hours, and counseling.

Dr. Reed said having that in-house service is not only convenient, but also is a critical way to make health care less daunting and more personal for patients. 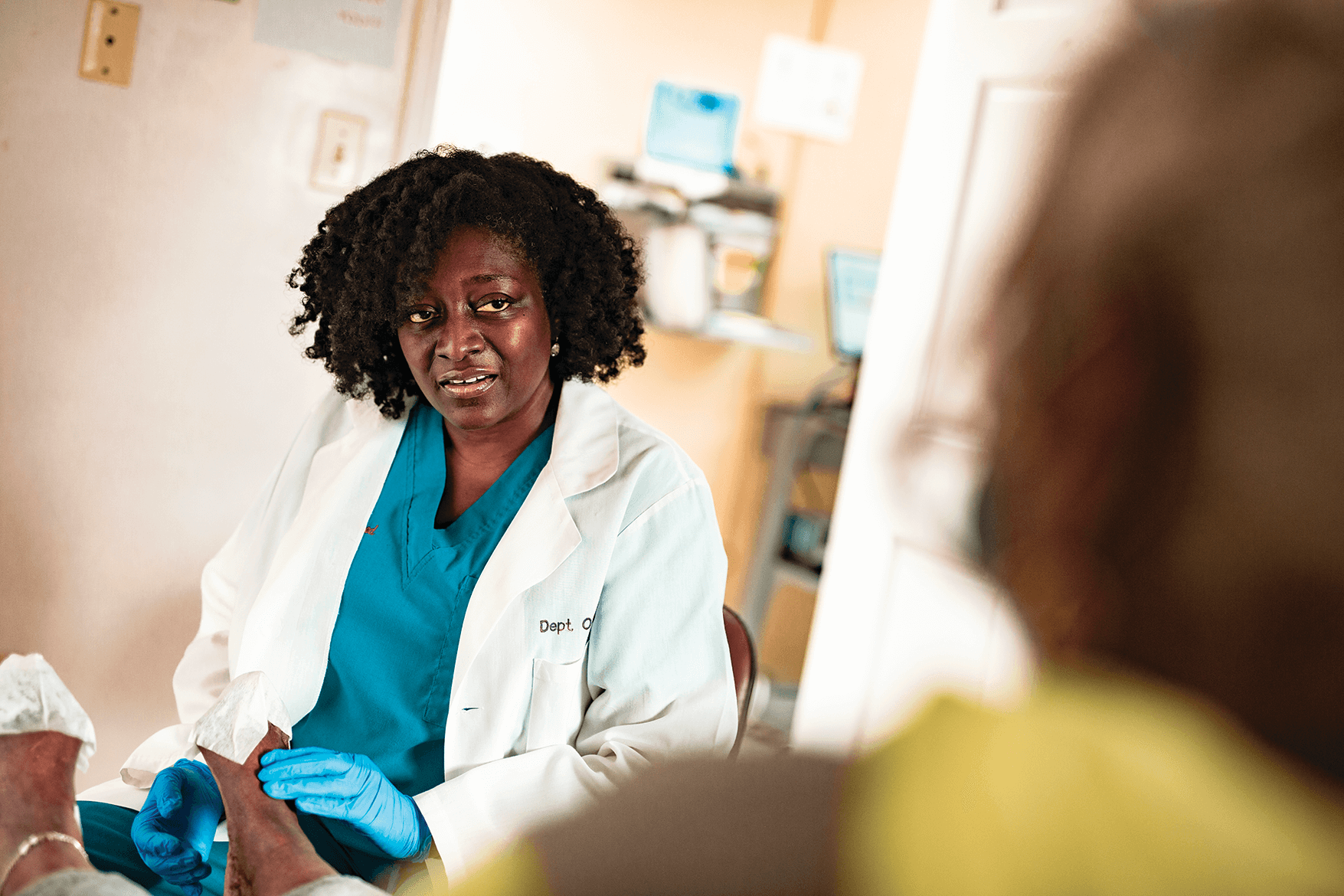 Dr. Reed works with a patient in her podiatry practice. She said her inspiration to become a podiatrist stemmed from a desire to “find something I want to do that’s got a lot of people around, and it’s not just in a lab.”

“I can consult with the pharmacist and then know that my patients pick up their medication,” Dr. Reed said. “Now, they may not take it, but at least they picked it up — that’s half the battle right there to get them to be more compliant with the treatment.”

Dr. Reed now is readying to open TPD to the community at large, hoping it can be an important step toward health equity in the area. As of March 2022, TPD Pharmacy was on hiatus for a few weeks while Dr. Reed explored a potential merger with another local pharmacy to open the service to the broader public. The goal is to merge under the same umbrella organization but open multiple sites to serve the area outside of her practice and her patients, Dr. Reed said.

Growing up in Florissant, northwest of St. Louis and south of the Missouri River, Dr. Reed initially wanted to be an engineer. She attended Lindenwood University in St. Charles, Missouri, graduating with a degree in chemistry in 1992.

Not wanting a discipline that involved too many bodily fluids — “I can’t do dentistry; I don’t know how people do it,” Dr. Reed said, chuckling — podiatry piqued her interest because it was something “where I can make people feel better on their first visit. There were a lot of things that attracted me about being able to make people feel better, quicker.”

Her parents were skeptical about it when she first approached them, Dr. Reed said. But when her father asked around, he learned the brother-in-law of one of his golf buddies was a podiatrist. Her father arranged for her to shadow Robert Moore, DPM, at his practice in St. Louis.

From there, she did a summer pre-med program at Fisk University in Nashville, then was accepted into the Dr. William M. Scholl College of Podiatric Medicine. She received her degree in 1997 and completed her residency at Saint Barnabas Hospital in New York, before going into private practice in St. Louis in 2001.

Proper health care is a continuum, necessitating preventive and routine care to avert the need for critical medical intervention. Over her two decades in the field, Dr. Reed said she has seen how patients in the Walnut Park West neighborhood where she practices have systematically been denied that kind of care.

It breaks my heart that they have to go through a whole lot of stuff and then they end up coming to me so I can fix something somebody else didn’t take care of.

As in many underserved areas, health problems lie at the intersection of multiple social equity issues, like nutrition. The area near Dr. Reed’s office is peppered by fast-food restaurants, including national and international chains like McDonald’s, Wendy’s, White Castle, Popeyes Louisiana Chicken, and numerous pizza, burger and barbeque spots.

“You can get all the fried chicken you want around here … but that’s about it,” Dr. Reed said.

Transportation is a factor as well. “If you want an apple or banana, you have to go kind of far. We’re right on a bus line, but you would definitely have to take a bus or drive further down several miles before we get to a grocery store,” Dr. Reed said. “It’s really hard to get a decent grocery store in the area.”

The area is predominantly African American. Dr. Reed said she often has patients with inadequate insurance coverage, plans that involve extremely high copays or as high as 90% coinsurance costs.

Combine the lack of quality-of-life amenities with paucity of comprehensive medical care, and “it just makes it harder for them to access the things that they need,” Dr. Reed said.

Historic mistreatment of people of color in medicine continues to play a role, Dr. Reed said.

“I just want to make sure that my patients are taken care of, because sometimes I’m seeing them go to other places, and they kind of get subpar treatment because they are people of color … or they might think that they’re going to get decent treatment, and I see different things that have been done to them.

“It breaks my heart that they have to go through a whole lot of stuff and then they end up coming to me so I can fix something somebody else didn’t take care of. Or they’ll come to me when their foot is almost hanging by a thread, and I’m like, ‘I wish you could get here earlier.’ I try my hardest to make sure that my amputation rate is low, (because) a lot of it is really treatable and even preventable.”

All of that informs Dr. Reed’s approach to TPD Pharmacy. Along with making medication easier for patients to get, she said they can provide personalized service, answer questions and guide people through the treatment. It’s a throwback to the type of relationship neighborhood pharmacists commonly had with patients, who sought them out for advice in addition to — or even instead of — physicians.

It’s “definitely a more personal touch, because I think people respond better to that,” Dr. Reed said. “Sometimes, people are trying to get medication pre-approved from the insurance company — that is some paperwork sometimes just to get your patient what you need to get them. The pharmacist is willing to go the extra mile and make sure they get that or help me get it for the patient, and that helps. … She’s also good at making sure they take (medication) correctly, following up to see if they’re using it, things like that.”

Once TPD Pharmacy is open to the wider area, Dr. Reed said she has no intention of stopping there. She wants to compete with, or even surpass, major chain pharmacies. “But I’ll start in the community and work our way up,” Dr. Reed said.

Dawn Rhodes is a Chicago-based writer and editor. She’s worked in journalism for more than a decade.

Solving the Nursing Shortage A network of support, including mentoring, academic guidance and enrichment, along with clinical placements, internships and employment, awaits local high school students who enter the pathway, progress to admission at Lake Forest College and matriculate into a Master’s Entry into Nursing Practice program at RFU. Read More

Meet our Inspiration To excel in life, opportunities are needed. The rest relies on passion and hard work. Sarah Mata, 18, a senior at Grayslake Central High School, is a first-generation American who was afforded an opportunity by way of her mom and dad migrating from their home in Mexico to the United States, hoping to give their children a better life. Read More

How Can Institutions Respond to the Challenges Students Face in Affording Health Science Education? These past two years have led to a great deal of introspection. More than ever, we have become aware of just how connected we are, and how an impact we have on a personal level can have an effect on a community and even a global scale. Read More

The EatWell Culture The off-putting food pyramid is long gone. The more straightforward plate has taken its place. Everyone knows the plate and the same 30 to 40 foods, according to Jasmine Westbrooks, MS ’19, RD, LDN, CDCES, that end up there for our breakfasts, lunches and dinners. Read More

The Path to More Mobility From the bathroom of a research lab in San Antonio, Texas — where Claudia Moreno Romero, SCPM ’24, worked in 2020 — she whispered into her phone the news of her acceptance to the Dr. William M. Scholl College of Podiatric Medicine, and, on top of that, she’d been awarded a $20,000 Scholl Foundation Scholarship. Read More

Filling a Prescription for the Community When Tracy Reed, DPM ’97, DABPM, sent her patients away with prescriptions, she couldn’t be sure they took the next step to fill them. Being in an under-resourced part of St. Louis didn’t help, since that meant many of Dr. Reed’s patients couldn’t always easily access pharmacies — or health care. Read More

How We Rise RFU Trustee Rosalind Franklin, the unofficial tender of the life and legacy of her aunt, Dr. Rosalind Franklin, and Marie Benedict, who specializes in unearthing the hidden stories of important women, met by Zoom for a conversation about the author’s latest work of historical fiction, “Her Hidden Genius,” and the scientist who inspired it. Read More

Developing Precision Medicines for Rare Diseases Michelle Hastings, PhD, looks forward to the day that she can give hope to parents of children with genetic diseases who reach out to inquire about potential treatments. Read More

The Ingenuity Behind the Luxury Whether dressing for the office or finding the right shoes for a night out, footwear decisions more often than not come down to style or comfort. As for Marion Parke, DPM ’09, she had grown tired of standing at the threshold of her closet mulling over which pair of shoes to wear. Read More

Eunjung Hwang Awarded Sloan Research Fellowship The Alfred P. Sloan Foundation announced in February that Chicago Medical School Assistant Professor EunJung Hwang, PhD, was awarded a 2022 Sloan Research Fellowship — one of the most competitive awards available to early-career researchers and is often seen as a marker of the quality of an institution’s science faculty. Read More