When Kina Peppers, MD ’01, delivered the keynote address at the Chicago Medical School’s White Coat Ceremony in September, she told members of the Class of 2025 that they would wear many white coats throughout their lives and careers.

Dr. Peppers spoke from deep personal and professional experience, reflecting on the many coats she has worn over the years, from the one she received at her own White Coat Ceremony, to the ones she wore while serving in the Army, to the ones she donned as an OB/GYN, as a business owner and even as a patient herself. Each one represented a specific obligation — to her patients, her country, and her own health and well-being.

“I made a commitment 10 years prior to medical school in the Army National Guard, after finishing officer candidate school,” Dr. Peppers said. “We started with a class of 130 handpicked soldiers and 18 months later graduated 29. I trained the first weekend every month throughout medical school.”

After finishing OB/GYN residency, Dr. Peppers served two tours in Iraq, in 2006 and 2009. She retired as a lieutenant colonel after 24 years. 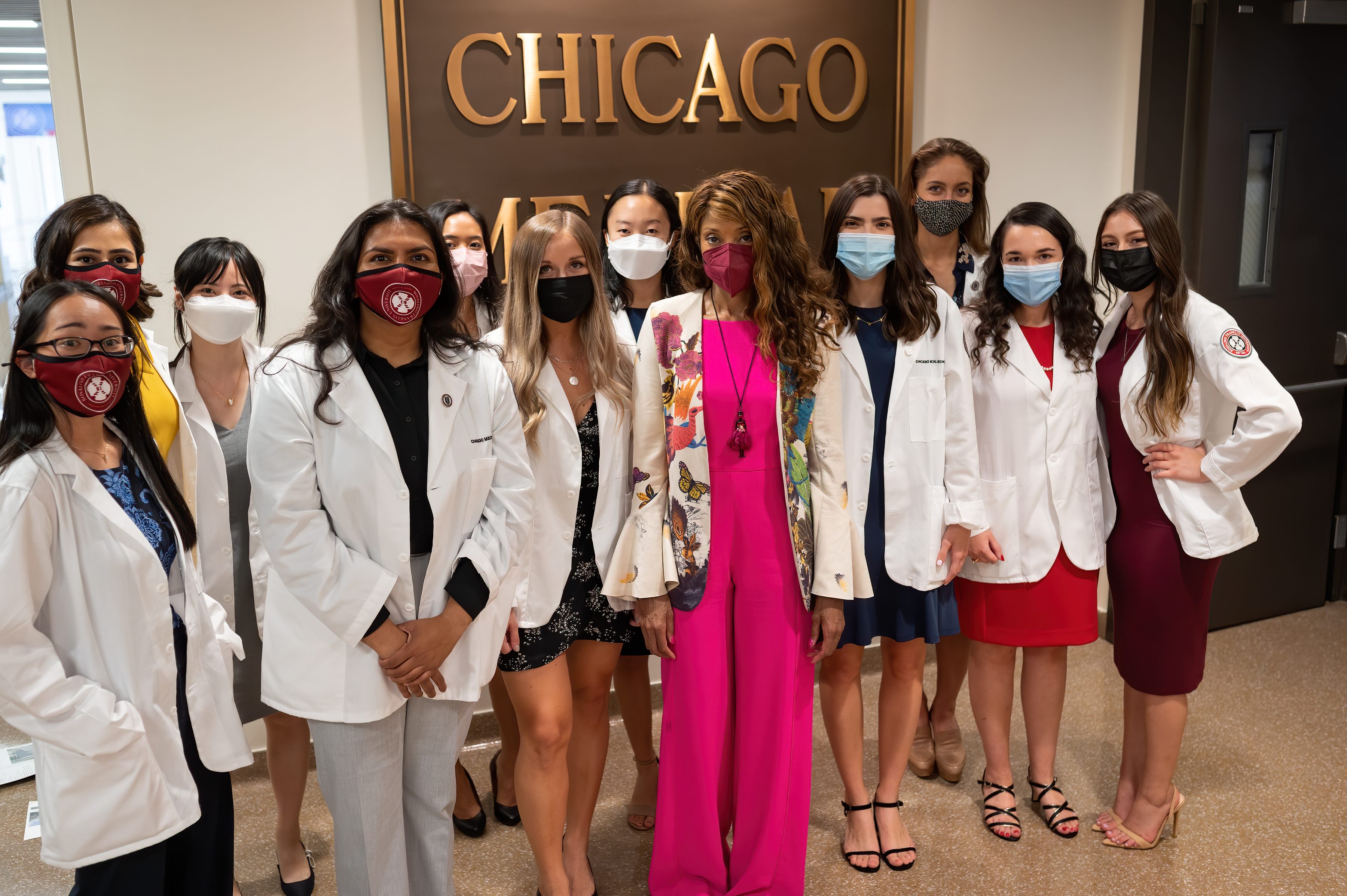 Dr. Peppers interacts with CMS staff, faculty and students from the Class of 2025 during her September 2021 visit to campus.

“I did so many things when I was in Iraq. I worked in a troop medical clinic and a women’s clinic, and I was also on call for the trauma hospital and I served on the rape team. I was awarded the Bronze Star for doing all of that.”

Although she found the work fulfilling, Dr. Peppers did experience a time during her 2009 deployment when she found herself questioning why she was there. She soon had her answer.

“I received a page from the hospital saying that they had a lady with a positive pregnancy test and blood in her abdomen up to her liver,” she said. “They wanted to put her on a helicopter and transport her to Baghdad. I immediately had them transfuse her, and when I took her to the OR, I found she had a ruptured ectopic pregnancy. I knew then that if I didn’t go to Iraq for any other reason, it was to save at least her life; had she been put in a helicopter, she would have died.”

I was told I may never walk or see or talk again. Through the grace of God, I made it through. I learned to be a great doctor, and also a great patient.

After returning home, Dr. Peppers found herself facing her own life-threatening illnesses: first a brain aneurysm, then hospitalization with neuromyelitis optica, a rare autoimmune disease of the central nervous system that left her paralyzed, blind and without a voice due to intubation.

“I was told I may never walk or see or talk again,” Dr. Peppers recalled. “Through the grace of God, I made it through. I learned to be a great doctor, and also a great patient.”

After a year of intense rehabilitation, along with her own fierce determination, Dr. Peppers recovered. Today, she uses her hard-won experiences to help other women with chronic illnesses achieve healthy lifestyles through her company All In Phenomenally. She is also authoring a book titled “Shattered But Not Broken: A Doctor’s Transformational Journey from Illness to Resilience.”

“Some of the women I work with are on multiple medications for their illness. Some are obese. I understand their struggle. I had to take steroids and that caused me to gain 70 pounds. I committed to losing that weight, and I did through changes in mindset and exercise. I give women the confidence to break the genetic chain and make lifestyle changes that help them get off meds,” Dr. Peppers said.

She also teaches mindfulness that helps women learn how to eat for better health, and encourages journaling and affirmation as a way to reinforce their commitment to putting themselves and their health first. She calls this approach “the cure when there is no cure.”

“I tell the women I work with, ‘You are not your illness. Put all your attention and effort on what’s happening now. You can learn to move forward.’”

Sara Skoog is a staff writer with the RFU Division of Marketing and Brand Management. In addition to writing for Helix and other university publications, she also produces Pulse, RFU's monthly e-newsletter.

In the Swim A few weeks after returning from the COVID-delayed Tokyo 2020 Olympic Games, Brian Cunningham, DPT ’08, reflected on his role in preparing Caeleb Dressel and other members of the U.S. Swim Team to chase down 30 total medals, seven Olympic records and two world records. Read More

Feet First To the untrained eye, something as simple as an error in a magazine advertisement might go unnoticed. However, for Howard Liebeskind, DPM ’78, FFPM RCPS(Glasg), DABMSP, FAAPSM, spotting a design flaw in a misleading ad for running shoes catapulted the start of a 42-year career in podiatric sports medicine. Read More