By Meg Wakefield
A few weeks after returning from the COVID-delayed 2020 Tokyo Olympics, Brian Cunningham, DPT ’08, reflected on his role in preparing Caeleb Dressel and other members of the U.S. swim team to chase down 30 total medals, seven Olympic records and two world records. (Photos provided by Dr. Cunningham)

“Representing your country, hearing the national anthem, seeing the flag go up and realizing that you have a small impact on that...” Dr. Cunningham said. “Recognizing that my skills from a clinical point of view can transfer over into a sports arena at the highest level is just really, really cool.”

Dr. Cunningham’s connections to competitive swimming stretch back to his native Ireland, where he was a standout athlete from a large swimming family and participated at a high level through high school and college. His parents developed and still run a swim club in his home county of Limerick.

Heeding his parents’ advice to head to the United States, he emigrated in 1994 after graduating from Robert Gordon University in Aberdeen, Scotland. In the decades since, he established himself as one of the top physical therapists and swim specialists in the United States.

Dr. Cunningham graduated from RFU’s Transition Doctor of Physical Therapy (tDPT) program, which he credits for allowing him to achieve his career goals, since the licensure is required for the Olympic Games and other elite competitions.

While his primary professional focus is on competitive swimmers, he said his goal is to help all of his patients achieve their optimal performance or regain movement for a healthier life. He runs his own practice, called Peak Body by Design/The Swim Doc, in Glenview, Illinois, where he lives with his wife, Nell, and son, David.

Dr. Cunningham has a unique approach to treatment, in that his focus is on mind-body connection and treating the entire athlete, evaluating how they move and helping them maximize their potential.

Dr. Cunningham said he had worked on the USA Swimming High Performance staff and had an extensive background in treating elite athletes, so he “kind of knew about four to five years ago” that he was a candidate to work with the Olympic team. He officially found out about a month prior to July’s delayed start of the 2020 Games, but he did not quite know what would happen due to the COVID-19 pandemic. Traveling overseas had its challenges.

“I was a little bit freaked out initially, but USA Swimming and the United States Olympic & Paralympic Committee had so many virtual meetings on safety precautions and COVID-19, and the Japanese government was very particular on COVID testing,” he said. The entire Olympic swim and support team wore masks and stayed isolated in Tokyo in addition to being tested daily for COVID-19.

I really have to know and understand the athlete — not just their physiology, but their psychology.

“We were in a bubble in Hawaii,” he said. “They did a domestic camp there, and we had to screen a lot of the rookies medically and make sure everything was OK and get them to train and move them to Tokyo. If anyone tested positive, none of the team could go, so the stress was heightened.

“They’ve been training for this for five years,” he added. “It’s a battle. It’s not life or death, but it’s everything they’ve trained for, so you don’t want anything to go wrong.”

Dr. Cunningham explained that this year’s Olympic swim team did not have many injuries, so the main focus was on recovery between races and getting the athletes mentally and physically primed to compete. Name your favorite U.S. Olympic swimmer, and chances are Dr. Cunningham has worked on them — for example, his collaboration with seven-time Olympic gold medalist Katie Ledecky goes back to the 2013 World Aquatics Championships in Barcelona, Spain. 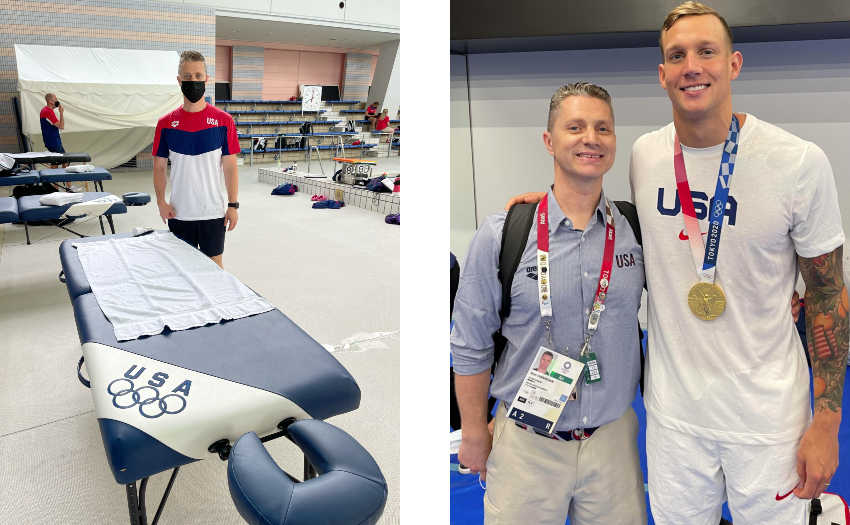 At right, Caeleb Dressel wears one of the five gold medals he won at the Tokyo Games with Dr. Cunningham.

He uses cutting-edge methods such as myofascial decompression — similar to “cupping” but involving movement of the cups across tissue — and was part of the team of PTs that first used it on the legendary Michael Phelps.

In Tokyo, a typical day began around 6 a.m. with a shower and breakfast before heading to set up shop for the athletes, who would arrive two hours before their morning competition.

“The race can take one minute, but the preparation can take two and a half to three hours,” he said. “Typically, the athletes would stroll in around 8 a.m. and compete between 10 a.m. and 12 p.m., so you’re there to support them with anything they need — an adjustment to the back or neck, manual treatments, some breathing techniques, some stretching. Putting on their suits can take 15 to 20 minutes, since they’re so skin-tight.”

After the swim warmup and more of their own activation techniques like foam-rolling and jumping jacks, the competitors head to the “ready room,” and Dr. Cunningham would do a shake-out with them, which is a quick massage or stimulation to jostle the nervous system. 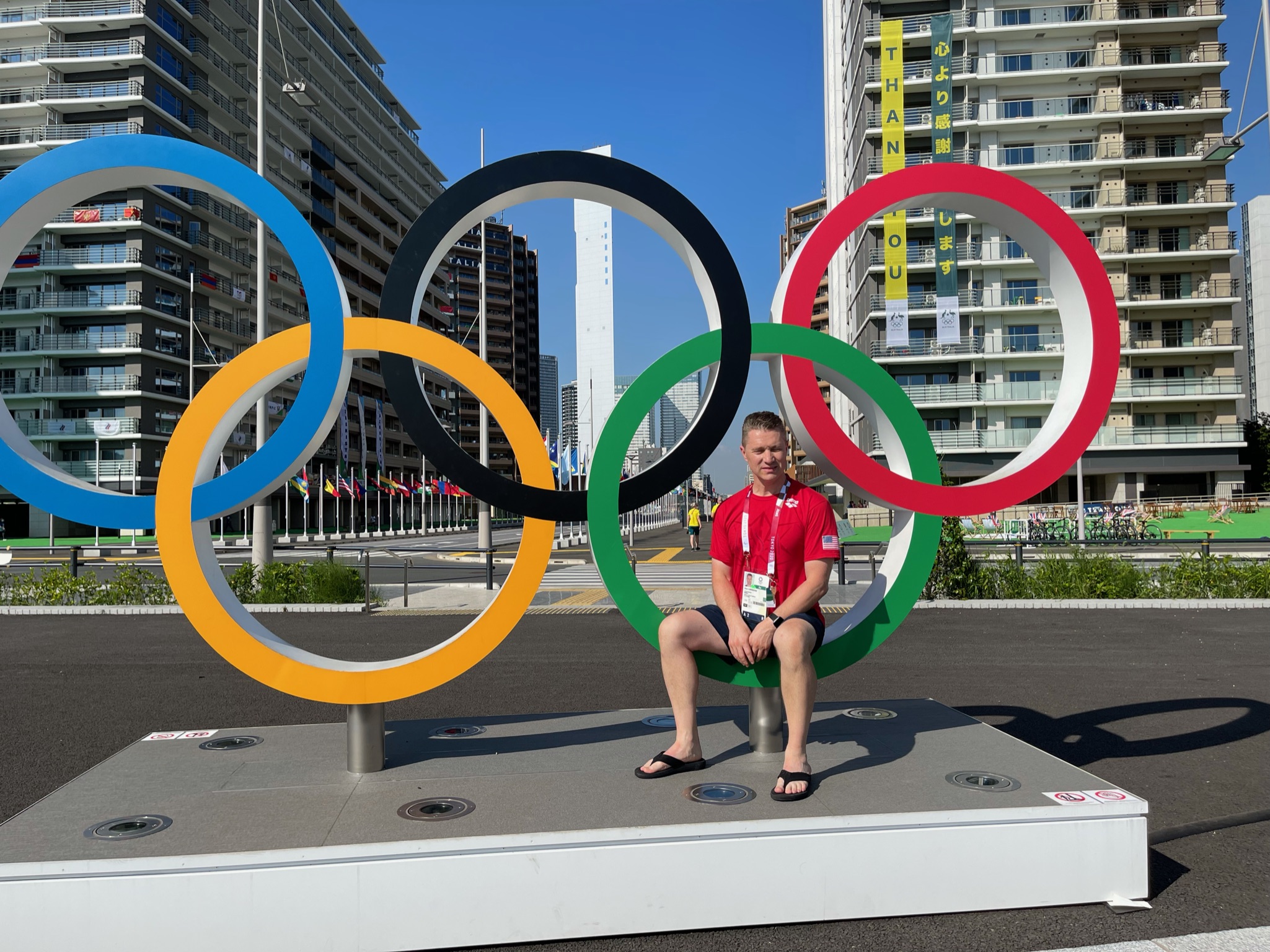 He refers to the swimmers he treats as “Lamborghinis or Ferraris,” and says, “If you do too much to the nervous system, you can make them into a Mini.”

“I really have to know and understand the athlete — not just their physiology, but their psychology,” he said, describing how he enjoys the challenge of getting inside the head of an elite athlete and learning what makes them tick. “That’s what’s kind of exciting — you have to be aware of what they need at all times.”

Reflecting on his experience at the pinnacle of sports medicine, Dr. Cunningham was thankful he had another team supporting him thousands of miles from Tokyo.

“I’m lucky to have done it and really honored,” he said. “Having my support system at home is really vital — I wouldn’t be able to do it without my wife and family.”

Meg Wakefield is director of alumni and student engagement with RFU’s Office for Institutional Advancement.

Leadership Message Rosalind Franklin University is entering a new year with great optimism and resolve, grounded in science and committed to helping lead the fight for a healthier future for all. Read More

Editor's Note As we explore the concept of lifelong wellness in this issue of Helix, we draw inspiration from a recent mini-reunion. Read More

Feet First To the untrained eye, something as simple as an error in a magazine advertisement might go unnoticed. However, for Howard Liebeskind, DPM ’78, FFPM RCPS(Glasg), DABMSP, FAAPSM, spotting a design flaw in a misleading ad for running shoes catapulted the start of a 42-year career in podiatric sports medicine. Read More

Moving Forward When Kina Peppers, MD ’01, delivered the keynote address at the Chicago Medical School’s White Coat Ceremony in September, she told members of the Class of 2025 that they would wear many white coats throughout their lives and careers. Read More

Interim Deans Appointed at CHP, COP Smooth and capable transitions were assured in mid-2021 when both the College of Health Professions and the College of Pharmacy appointed interim deans from within their ranks. Read More

Physical Activity: Moving Forward to Reverse Chronic Disease We do not need a microscope to assess our wellness. Exercise, along with a healthy eating pattern, has been proven to be a powerful combination to combat all non-communicable chronic disease. Read More