By Judy Masterson, Photos by Michael R. Schmidt
The lab of Dr. Johnny He, director of the Center for Cancer Cell Biology, Immunology and Infection, identifies a promising therapy and therapeutic target for HIV-Associated Neurocognitive Disorder (HAND).

The Center for Cancer Cell Biology, Immunology and Infection, directed by molecular biologist Johnny He, PhD, is part of a heroic scientific effort to improve the lives of people living with the human immunodeficiency virus (HIV). Dr. He recently led an NIH-funded study published in the journal Brain that identifies both a promising therapy and therapeutic target for HIV-Associated Neurocognitive Disorder (HAND) — the first advance of its kind in 40 years.

Antiretroviral therapy, introduced in 1995, dramatically reduced the number of HIV infections and helped people with the virus live longer, healthier lives. But the virus, even when suppressed, can have profound effects on the brain, causing a spectrum of memory, attention, language, learning and motor problems.

“Antiretroviral therapy prevents more virus from getting into the brain, but it can’t penetrate the blood-brain barrier, so what gets in stays,” Dr. He said. “Even at a low level, it triggers brain inflammation and activates some very important brain cells and causes neurological disorders.”

Strict adherence to current treatment drugs helps to prevent AIDS and severe AIDS dementia complex. But the flip side has been an increase in the milder HAND. And as HIV-positive patients live longer — studies show that they age at an accelerated pace — they face a higher risk for cognitive impairment.

“The most devastating dementia has disappeared,” Dr. He said. “But nearly 50% of HIV infected people develop HAND. There are no treatments, but not because we haven’t tried. We couldn’t figure out anything that could get into the brain and stop the disease.”

Dr. He’s lab, which moved from the University of North Texas Health Science Center to RFU in January 2020, is well-positioned to test and develop therapeutics for HIV. About 20 years ago, the team developed an animal model, a surrogate — because HIV does not infect mice or rats — that presents the symptoms seen in people with HIV and those with HIV on antiretroviral therapy. The model, which provides a clinical presentation of HAND and its brain pathology, has been distributed to more than 60 labs across the world, fueling advancements in neuropathogenesis research.

The study behind the Brain paper, “Activation of a7 nicotinic acetylcholine receptor ameliorated HIV-associated neurology and pathology,” was born of serendipity and the fact that substance misuse is a major issue for the HIV infected population. 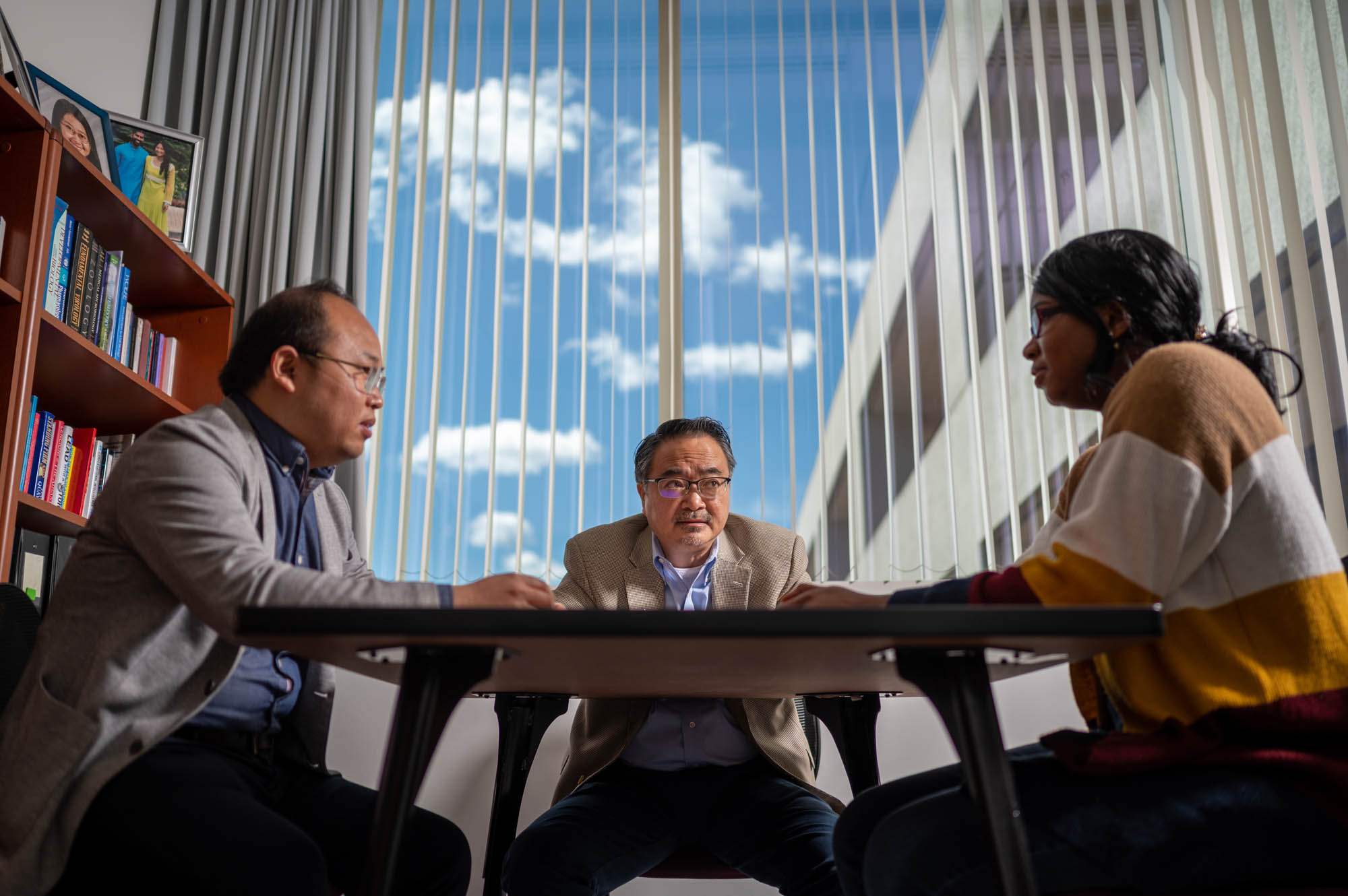 “It was pure accident,” Dr. He said. “We initially focused on how smoking affects HAND, expecting it would make it worse. We used a nicotine model but it didn’t work; it showed neither good nor detrimental effects. We found that nicotine is not very stable — its effects only last six to eight hours — which is why people keep smoking and why we didn’t see the effects.”

“This is the receptor that both nicotine and the nicotine surrogate work at,” Dr. He said. “We show the chemical has a protective effect, and how it works.”

The study shows how, through the a7 nAChR target, PAM greatly improves locomotor activity, learning and memory in HAND — both the clinical presentation and the regulation of the brain wiring.

The mechanism discovered by Dr. He and his team might have broad applications. PAM is in clinical trials for several other neurological diseases, including schizophrenia and Parkinson’s. The FDA has approved chemicals similar to PAM for use in Phase II trials for treatments of other neurodegenerative diseases. 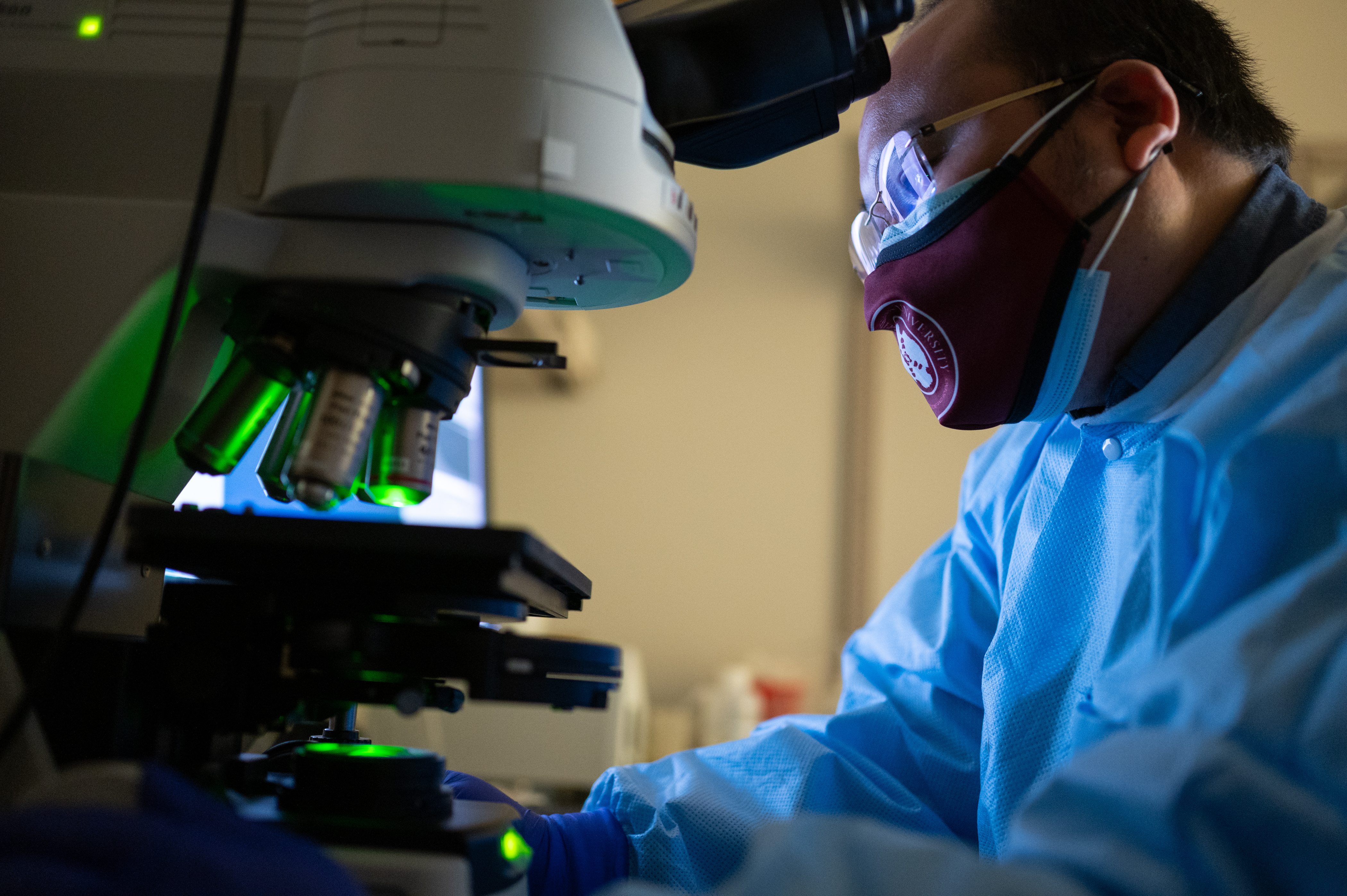 Dr. Zhao at work in the lab.

“My personal belief is that all neurological diseases share a common merging pathway,” said Dr. He, who offered evidence for the hypothesis in a major paper published in Nature Medicine in 2002. “We know this about the brain: The passage may be different, the trigger may be different, but the disease process will merge at some point and share a common pathway. It makes sense.”

He hopes to make the arduous leap from bench to bedside using a close relative of PAM approved for humans. He’s working in collaboration with a clinical neurologist at the University of Maryland who can conduct imaging and has access to a cohort of HAND patients.

“Our data from the animal study are so strong, but we need to make sure we can transition this to humans,” Dr. He said. “We understand the disease mechanism, but while lots of people have tried, we haven’t made any advances on therapeutics. People can use the target — the receptor — to do structural design, to design chemicals based on the one we’re working on and design other therapeutics to treat this disease.”

Through the Microscope RFU faculty and students reflect on Dr. Rosalind Franklin as the RF@100 commemoration comes to a close. Read More

A Shot of Hope The Community Care Connection maintains a vital presence in underserved communities thanks to the support of RFU’s regional partners. Read More

If You Build It... A platform for accelerating RFU’s nationally recognized research into therapeutics, the Innovation and Research Park continues to gain steam despite challenges posed by the pandemic. Read More